andra started playing golf at the age of 5. After a successful amateur career she joined the LPGA tour in 1968, the first Canadian to do so. Through her 16 years on the tour she won 8 times including a Major, the LPGA Championship, 2 unofficial events, and was consistently in the top 10 players on the money list throughout her career. In 1984 she retired from the tour and returned home to Oakville, Ontario and started the Sandra Post Golf School. She makes lessons enjoyable and her love of the game is infectious. She has been a broadcaster for CTV, ABC, SPORTSNET AND TSN. She co-authored a book, “Sandra Post and Me” and developed two instructional videos, “Getting Started” and “Around the Green.”

Sandra is a member of: 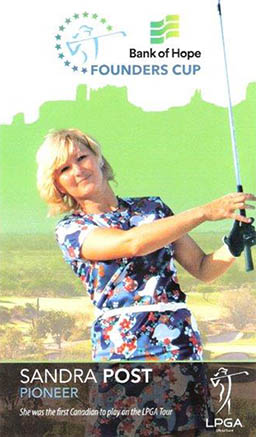